Prisoner of the Queen by E Knight 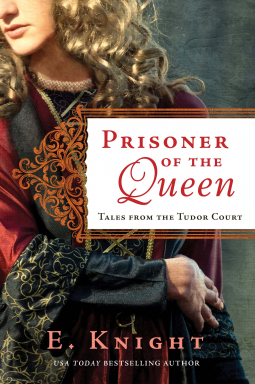 Described as tales from the Tudor Court, we deal mainly with the court of Queen Elizabeth. She was a very good ruler, consolidating England's position as a power to be reckoned with but in this book she comes across as a hard, shrewd negotiator who acted only for the betterment of the Crown and did not care for the emotional damage she brought about.

In this story Kat and Ned have fallen in love. Kat's mistake is that she is born into the wrong family. She is a direct threat to the throne and Elizabeth does not realise that Kat is only interested in making a family life for herself and to live peacefully elsewhere. Kat's family are treacherous and her father has been executed for treason, so has her sister the nine days queen. Kat's ancestry alone is enough to be threatening.

Refused permission by the Queen to marry, and under Elizabeth's constant supervision, Kat nevertheless marries Ned, conceives, has a child and is thrown into the Tower for treason. Whilst in the Tower she has another child for her husband, but this infuriates Elizabeth so much that she still refuses to allow Ned and Kat to live as husband and wife and banishes them to two different parts of the kingdom.

The heartache and sorrow that follows the two along with the workings and machinations of the Court form this story. Beautifully descriptive, detailed and full of history, the story is a must for lovers of historical fiction.

The book was sent to me by Netgalley courtesy of Lake Union Publishing.
Posted by Mystica at 5:54 AM

A story about Lady Jane Grey's sister? Sounds intriguing (in all senses of the word!).

I'm addicted to anything Tudor. Great review, adding it to my wishlist!