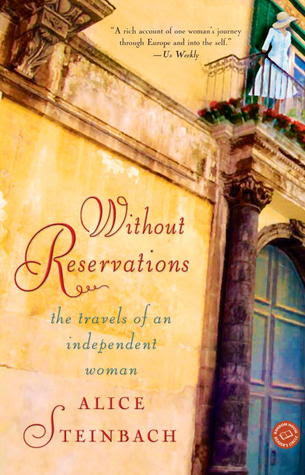 This book was so good that I was only sorry that I had to return it to the library and not hang on to it permanently. This is a book which I would like to read again in a years time maybe.

Lots of us would like to say we are independent women - like this Pulitzer prize winner we would pay our own way,  shovel our own driveways (or whatever the equivalent of that is) and  make our own choices, good or bad or indifferent.  This book was an insight on how Steinbach takes it one step further. To add to the interest this takes place in beautiful places - Paris where she unexpectedly find romance and more importantly companionship, Oxford for education on a rather unusual subject, and  Milan where she finds much happiness in befriending a young woman about to be married in a relationship which was so poignant - the feeling that I would extend to a daughter maybe. In Steinbach's case with two sons this was the daughter she did not have I think.

This is not a journey by Steinbach alone. It is illustrated and descriptive of the places where she visits and this was for me a wonderful read. Surprising and wonderful.

Back in Colombo once again to very hot weather. Coming from Melbourne which was chilly this is such a contrast. Coming back to preparing for the Singhalese New Year which falls on the 13th and 14th of April. Let the work begin (before the jollifications!). Too late for Mailbox Monday/It's Monday What are you reading? but following the blogs as per usual!

I love that cover! I have never heard of this book but after your review I'd love to read it. This woman's adventures would take me away.

I have a friend who is about to move to Dubai on her own, she honestly is an independent woman. Thanks for the recommendation, I'm looking forward to reading this book.

This sounds really good! Thanks for telling us about it - I'm going to look for it.

This book sounds right up my alley. Thanks for sharing Mystica as I've never come across it before.

this sounds like a book I must read. Thanks for letting me know about it. Cheers