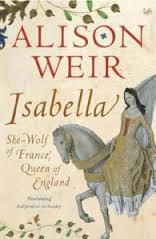 Described disparagingly as she wolf and alternately reviled and revered Isabella was a much maligned queen. The book by Alison Weir took time to read - this biography of one of England's most notorious queens was not a quick read.

Her marriage at the age of twelve to the King of England was meant to unite two countries and to prevent war between France and England and Isabella was very mindful of the fact. She was a very astute politician and a strong political advisor throughout her life who took her role very seriously even when she was not the power behind the throne.

Isabella apart from her political skills is remembered as one of the few women who was able to bring her husband to his knees, separate from him, keep him sequestered and then get him to give up his rights to the throne in favour of his elder son while she ruled as Regent. The rumour is that she also had him murdered. But this is not known for sure mainly because someone who was Edward II surfaces very much later in the story!  This is the thing that made her notorious as people felt it was not quite how Queens should behave irrespective of what went before!  What they did not understand were the reasons that made Isabella act like this. She initially wanted to protect the Kingdom for herself and her son.

Scorned by her husband for various men as Edward II had strong homosexual tendencies, the King was led by his nose by those factions which led to widespread corruption and financial irregularities in the Kingdom which led the Crown to bankruptcy. Always finding in favour of his paramours and their houses the King recklessly gave away countless properties, beneficiaries from those who were their rightful owners to whoever was flavour of the month as it were. Isabella knew that the country was heading for not just financial ruin but for rebellion and revolt and it is to this end that she did what she had to do.   That she also was involved with a courtier and that the relationship was frowned upon by all is another facet to the story.

The unfortunate part of Isabella's story is that she gave her heart to one who was equally a tyrant like her husband and though he did not treat her as the King did, he certainly made use of his position as her lover to get the very best he could for himself and his family.

The book was very detailed, with bits of information as to how much was paid for one item or another and this though at times heavy to get through, gave one a very good idea of the daily life of the royalty in a time like this. No easy task managing the estates, managing a Kingdom like this. Isabella was very conscious of the value of property and was intent on protecting anything that was hers and for this she fought long and hard. Travelling right around England almost constantly also gave one an idea of the scale of arrangements required before royalty moves!

I think that might be too detailed for me, but I bet my mom would love it!

not my kind of read because i tend to just zone out when there's too much details but i'm glad you like it :)

What a fascinating life!

I think this would also be a little too detailed for me. Lately with my tight schedule, a book has to be engaging throughout and not too thick!