THE SIGN OF THE WEEPING VIRGIN by ALANA WHITE 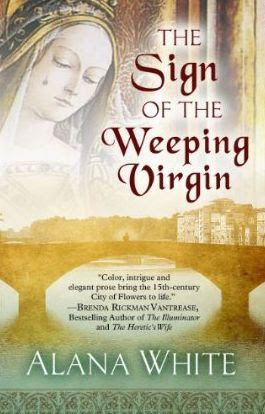 This was a win from Enchanted by Josephine and was I glad I won!

Set in the time of Lorenzo de Medici we have intrigue at its height. It is 1480 and Guid Antonia a career diplomat and lawyer and his nephew Amerigo Vespucci have to sort out and extricate their beloved city Florence from the excommunication meted out to its inhabitants by the Pope. We start out with the murder of Giuliano de Medici at Easter Mass - murdered on the instructions of the Pope and which is the reason why the Medicis are so much at war with Rome.

We have intrigue in the form of an abducted young woman, sending terror into the hearts of Florentines as the rumour is that she was taken away by the infamous Turks and we have a painting of the Madonna who weeps taken as a sign that God is angry with Florence and particularly Lorenzo de Medici . The people of Florence who loved the de Medicis now turn against them blaming them for their poverty and the spiritual vacuum which they have fallen into as a result of the edicts of the Pope.

So many interesting characters - Sandro Botticelli  and Leonardo da Vinci - Renaissance Art and its development and the description of its characters all added to the interest of the story. Florentine Art alone and history are interesting enough and when you add a mystery to the mix it was even more so. I liked following Antonio's powers of deduction and logic to solve the case. In the backdrop of Florence it was a very interesting read.

Very little reading done this week as well. With the holidays behind me there is a lot of work to be done. Leaving for Rozella tomorrow morning. It is so very hot and humid here in Colombo that to just get away to a cooler clime would be a relief.
Posted by Mystica at 5:05 AM

Oooh, this one sounds really good! I love books with Italian settings.

This sounds really interesting. I wasn't aware of it. Safe travels.

I haven't read much lately either. I am re-reading Pride and Prejudice at the moment as I'm teaching it this term. I guess that counts!

Mystica, Thank you so much! I'm so happy you won, and especially delighted that you liked Weeping Virgin. And that you cared enough to post about it. Happy reading....! Alana