REVIEW - ROOPA FAROOKI'S THE WAY THINGS LOOK TO ME 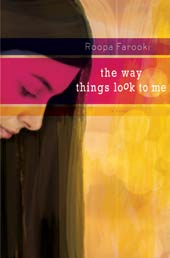 I have been lax in blogging/reviewing books as whatever free time I have I want to spend reading!!!! Returning on Sunday to Sri Lanka with a brief stop over in Singapore.

Roopa Farooki is an author I have read once before - this was a wonderful read. Asif, Lila and Yasmin three young adult children thrown together after the sudden death of both parents find themselves adrift and not knowing exactly how to cope. Asif feels responsible for Yasmin who has Aspergers Syndrome and becomes Mother. Lila absconds from home finding it impossible to cope with her sibling who has she felt taken over her entire life by focussing her mother's attention and love only on her to the exclusion of the other two children.

How a mother tries to manage single handedly with a child who has such a disability is part of the story. But, only a little part as she dies very early in the story. However, how her handling and inter-action of this one child excludes the other sibling totally and alienates her from the family is an important part of the story. The intense almost hatred that Lila develops against Yasmin who she feels is almost a parasite on the family is so very well told. Although we do know that it is "not quite right" for Lila to act like this, we also understand and accept her attitude/her feelings/her rejection almost from the family so that she does not end up as the black sheep of this family. This is the brilliance of the story.

Asif seems stifled by his responsibilities - to the exclusion of any kind of life outside going to office and returning. home to a fixed routine determined by Yasmin who decides even what is for breakfast. His selflessness even goes to the extent of not drinking coffee because the color of coffee disturbs Yasmin who wants everything just so with absolutely no changes to a fixed routine.

Lila seems promiscuous but is actually looking for someone who would love her for herself not just a quick jump into bed. Her resentment of Yasmin is so deep that you feel that this is going to be forever. Thankfully the story does not end in hatred and bitterness. Both Asif and Lila find love and with that comes healing specially for Lila and a reconciliation of some kind is on the cards.

My knowledge of this illness was zero before I read this book and my sympathies were totally with Asif and Lila not with Yasmin . Both siblings were victims of Yasmin's illness and their coping skills were wonderful (in totally differing ways).

I enjoyed this book very much and would love to recommend it as a good read.
Posted by Mystica at 2:17 PM

Seems a good book. I like the idea of seeing the viewpoints of siblings of someone with Aspergers/autism.

I think it's one for the wishlist!

Looks like you enjoyed this one more than me. I had a hard time relating to the older sister but I did enjoy parts of it. Good review.

Oh wow, I do like the sound of this one. Wonderful review.

Great review, it does sound like a book to read

Roopa Farooki name jumped out to me as I seems to see her books before. Thanks for recommending this one. I'm contemplating to make 2012 the year for South Asian Literature year. :)

Roopa Farooki name jumped out to me as I seems to see her books before. Thanks for recommending this one. I'm contemplating to make 2012 the year for South Asian Literature year. :)