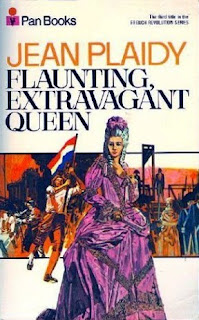 Marie Antoinette comes to Versailles as the bride of the Dauphin as an innocent, light hearted girl of fifteen. She has never been able to think other than for the moment of something that is pleasant, light and fun. However much her mother has stressed on her the need to be serious, far thinking, and conscientious, she has not been the type to take these "scoldings" to heart.

Landing in France, she is flummoxed by the etiquette that is demanded by the Court. From her arrival she is aware that she is no longer an Austrian citizen - she is made to remove every bit of clothing she wore at the border, including a ring given by her mother and wear fresh clothes which were purely French.

From the beginning of the novel one knows there is a sense of impending doom. We know that the fun and frolic which Marie Antoinette surrounds herself is too frothy to last. She seems to live in a bubble of unreality - far away from any kind of real life. Her passion for clothes irrespective of cost, the same thing goes for diamonds, her setting up of an idealistic farm with sheep with ribbons tied around their necks and the ladies being dressed as shepherdesses - makes you feel that this cannot last. Though most people are aware of the end even before they read the story, the cleverness of this author is that she draws you in knowing you are going to a place which is of doom and gloom. You still want to read however.

Marie Antoinette 's role is from the beginning fraught with uncertainity. A bride to a very unwilling bridegroom,  no proper counsellors for either Marie Antoinette or her husband, the King overshadowing everyone till his death, the young couple thrust blindly into the spotlight of the political arena with neither having a clue who is friend or foe, even the immediate family vying for position or for taking over the throne and you have the stage set for disaster. Add to this the Queen's gullibility, the recession and poverty of the time, people wanting a scapegoat and a "foreigner" as Queen available and we know who is going to be the victim.

Such a sad read but a very informative one. I did not know that Marie Antoinette had a Swedish lover who was faithful to the end, neither did I know earlier on that Louis her husband was "slow", disinterested in anything and everything and impotent into the bargain. Such a tumultous period in French history beautifully told.
Posted by Mystica at 12:21 AM

Marie Antoinette was such an interesting figure - almost a 'cult' figure today. Have you seen the movies based on her life?

From what I understand, she was clueless and merely a pawn, as was, perhaps, the King himself.

I will definitely have to look into reading this one. I became really interested in Marie Antoinette after reading a novel about her a while ago.

I would like to explore Marie Antoinette more. I don't know much about her. Great review!

I love reading historical fiction that teaches you things too. What a great read!

I used to love reading Jean Plaidy's novels when I was at school, especially about Henry VIII's six wives and Elizabeth 1. I've got her two books on Lucrezia Borgia on my shelf which I'm dying to read.

Wow, it sounds like that book is loaded with fascinating tidbits!

I've never read anything by this author. Sounds like a fascinating story.

Haven't read this book, but knew about Louis being a bit of a blockhead. I think the image of MA may be distorted from the truth, but I guess we'll never truly know. Glad you enjoyed Plaidy. That woman knows how to write a book!