The Last List of Miss Judith Kratt by Andrea Bobotis 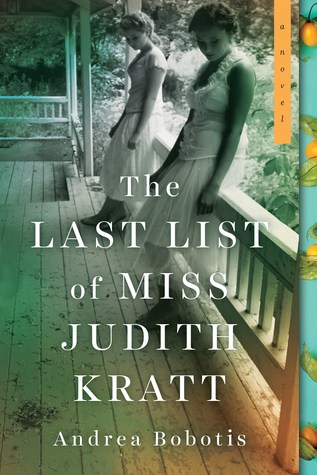 The Kratts were a power to reckon with in the town of Bound. Father had built up a store from nothing and one which sold everything and monopolized the sale of everything in the town. That he ended up in poor circumstances, embittered was another story.

Here we deal with Judith and her unerring love of things, the value she puts on stuff with a long ago sell by date, inventorying all that she has and reminiscing about what she has lost. She also lives in the past remembering past days, the intricacies of her Mamma's history and her involvement with a man of colour (unheard of in those times), and her brother's murder which sent her father into a spiral downwards and finally the return of the prodigal sister home.

It was a complicated story. Whether it was meant to depict a family from the South of the time I couldn't say but it was not a "nice" family that much for sure. Segregation was very much part of the scene and it was disquieting when one of the family got involved with the help. The remedy was drastic.

Sent to me by Netgalley for an unbiased review, courtesy of Sourcebooks, Landmark.
Posted by Mystica at 8:39 PM

It does sound complicated.

The south at that time was pretty complicated with its social hierarchy. This sounds like something I'd like.

Disquieting is an interesting description, thanks for sharing your thoughts