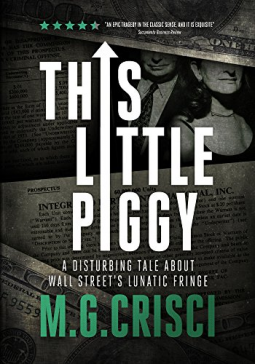 This book brought to life the very theory that money corrupts and that immense amount of monies definitely upsets the apple cart unless you know how to handle it.

The prospect of making money, lots of it draws Victor in. He has no knowledge about Wall Street, about the manoeuvring the discipline of making money. He not only dives in head first, he drags his wife in. Finding themselves bankrupt and desperate, he then thinks of suicide in a rather unusual manner to absolve himself of all his wrongdoings.

The storyline was good, the characters were very typical of what they were depicting but the story also moved around a bit too much.aa

Sent to me by Netgalley for a unbiased review, courtesy of BooksGoSocial.
Posted by Mystica at 7:21 PM

This sounds like it's made for a movie. I haven't tapped NetGalley in a while mainly because I have so much to read already.

Hm, not sure about this one - so many novels that sound similar.

you will have an incredible weblog right here! would you prefer to make some invite posts on my blog? online casinos for us players