Her Name Was Rose by Claire Allan 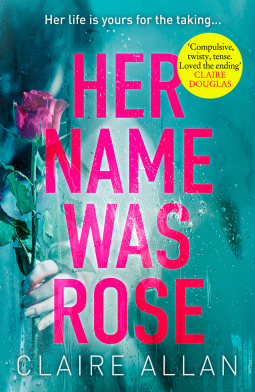 A seemingly straight forward accident. A car knocks down a young mother and she dies instantly. The ramifications of this accident spread far and wide and despite everything to the contrary nothing is as it seems. When the cops decide it was premeditated murder, especially since the driver of the car commits suicide a bit later things get complicated. When Kevin's death is deemed suspicious as well, the police are determined to get to the bottom of the two murders.

Rose seems very happily married to Cian a very successful writer. With a young toddler Jack, her life seems complete. Beneath the surface however huge cracks have begun to form and in Rose's workplace more than anywhere else the emotional effect of Rose's absence seems to be huge. Why is this so. Why do the two bosses - the dentists in the surgery seem to be so effected that it is making everyone else so tense and uptight. Rose was a loyal, good worker but it seemed so personal that you knew that things were not right.

Cian the husband is the first suspect. He is arrogant, a bully and when Emily falls for him she falls hard. She only sees the widower grieving for his wife, trying to cope. She does not see that he is quite happy with the way events have turned up and it seems till the very end that he is the obvious murderer - of both Rose and Kevin.

The final outcome was a turn up for the books. Unexpected and like all good murder mysteries coming out of the blue.

A very interesting story, though it took me a while to get into it.

Sent to me by Netgalley for an unbiased review, courtesy of Avon.
Posted by Mystica at 7:43 PM

Very mystifying and I can see that once you'd be hooked it would keep you going. And a surprise at the end.

Glad to hear it was worth sticking with it after a slow start.

Sounds good. I like when a book ends up being better than you thought it would.