A Death at Fountains Abbey by Antonia Hodgson 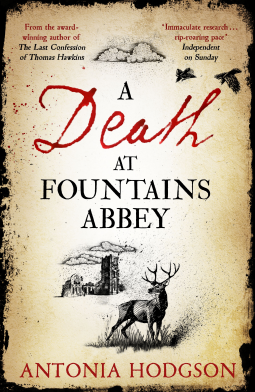 Thomas Hawkins has been sent on an assignment, blackmailed into accepting an assignment more or less. John Aislabie one of the wealthiest men in England has been threatened with murder and the murder threats are foul and frightening. Told ostentatiously to find from where the threat comes from, the actual reason for Thomas's visit is to find and return to the Queen a ledger which holds incriminating evidence that threatens the aristocracy, even going to the highest in the land the monarchy.

Aislabie himself finds himself in a complicated position. He lost his wife and daughter in a fire a long time ago but now he finds that his youngest daughter Lizzie has been returned to him, through a convoluted process. This has upset his second wife who fears that it is a fraud and an attempt to rob him though Lizzie herself has insisted that she does not want a cent of Aislabie's fortune because she is a well settled woman herself.

Thomas's life is in itself complicated. He has brought with him his partner Kitty whom he dearly loves and Sam his ward. Both of them are necessary to solve this crime and all of them are under personal threat while at the estate. The story unravels very slowly but the setting and the descriptiveness of the estate as well as of the unrest surrounding the property at the times is very well told.

The story is partly based on real life characters and is a good piece of historical fiction.

Sent to me by Netgalley for an unbiased review, courtesy of Hodder & Stoughton.

I am drawn more and more to historical fiction. This one sounds good.