The Lightkeeper's Wife by Karen Viggers 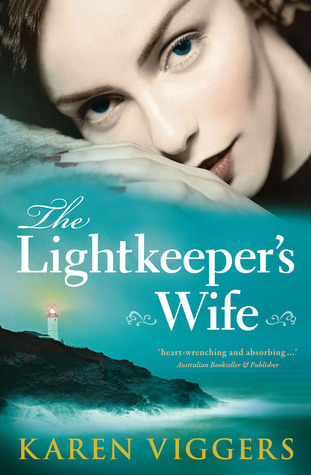 Mary is in very poor health and she is determined to end her days on the island where she was happiest. To this end she persuades her grand daughter to take her on a supposedly day trip to the island but she has made all the arrangements with the resident warden to stay on, without the knowledge of her family.

Mary's children are not happy with the arrangement but their feelings are varied. Her youngest Tom who is more aware of his mother's feelings understands her need but her eldest daughter Jan is furious. She however decides that till her mother comes to her senses and returns or as she wants it, brought back by either of the brothers, she does not want to have anything to do with her mum. All Mary wants to do is have a pilgrimage to all the places on the island where she was happy, think back to what life was like then and close the final chapter of her life.

At the same time we have this story from the perspective of the youngest son Tom, whose turbulent life is a source of worry to his mother as well.  He has taken the divorce from his wife hard, and never been able to quite settle in to life after his fifteen month spell in Antarctica. He is torn between wanting to go back or not and very undecided about what to do next. We have the other two siblings stories as well - Gary indifferent but not willing to take a stand on anything ruled by his dominant wife's wishes and Jan bitter and angry and realising only too late that being so full of pride and arrogance does not do one any good at all.

Set in a rather lonely, desolate part of the world Bruny Island was ideal for the backdrop of this story. Characters were ideal and the lifestyle of the time - harsh, no amenities and lonely went very well with the people who inhabit this story.

Another pick for me from Glen Waverley library.
Posted by Mystica at 5:33 PM

There's something so compelling about family narratives, isn't there? People react so differently to the same events and problems.

Thanks for sharing this one!

Hi there, looks like a good one! It would be great if you added your review to the Books You Loved: July collection over at Carole's Chatter. Cheers