THE PARIS WIFE by PAULA MCLAIN 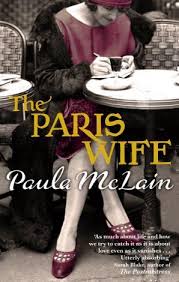 Right now for me the 1920s are everywhere. Even the book I picked to read after this one is set in this time period, we have The Great Gatsby peeking at us at every turn so it was quite coincidental to me to discover this book also set in the same era.

The story told from Hadley - Hemingway's first wife narration details the struggle and the way life for the Hemingways was at the very beginning. The very origins of the story in St. Louis is detailed and descriptive. From Hadley's own family to Hemingways and then their journey to Paris where it all began.  That Hadley was Hemingways biggest inspiration is apparent and that she was the wife who supported him at the time he was most needy is also very apparent. His other wives had it when times were much better (financially at least!).

Hadley's role as Hemingway's wife was not a bed of roses. The principle of free love and not having to tie yourself to a single partner was strictly weighed in favour of husbands who like Hemingway and his contemporaries took advantage of this without any qualms feeling that it was their God given right as such brilliant writers and thinkers. How the wives, girlfriends felt seemed to be a very secondary thing.

The book emphasises the theme of love and loyalty. Support of a husband through thick and thin. Not very well reciprocated by the husband however brilliant he was. He supposedly loved his wife to the exclusion of everyone else, she was his inspiration and support but that did not prevent him finding solace elsewhere.

This sounds fabulous. I don't read a lot of historical fiction but do enjoy it when it's about real people.

I'm glad Paula McLain has told Hadley's side of the story. I didn't know about it until now.

I enjoyed it quite a bit - didn't know anything about Hadley previously.

I just started this -- I'm not a Hemingway fan so I'm a bit grouchy in anticipation of him being a jerk!

Mystica, your comments about this book entice me to read it, sooner rather than later (it's been on my TBR pile for too long now).

I have always been interested in Hemingway and I would love to read this book about him and Hadley. Sounds like an emotional read, thanks for the great review!