A TRAITOR TO MEMORY by ELIZABETH GEORGE 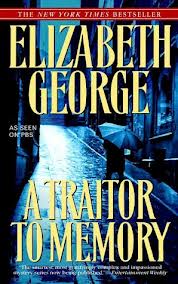 This mystery by Elizabeth George is slightly different from her others. The focus here is not on the famous Lynley and his partners Nkata and Havers but rather on a character in the story - not the victim of the murder itself but another equally important one. Gideon is a music prodigy who has been playing the violin since the age of seven and now finds himself unable to even hold the instrument. Why this has happened now and when it will change no one knows.

On the other hand we have our murder victim. Eugenia is a hit and run victim it seems but it is only the appearance of a hit and run incident. We then find out that she was run over three times by the same driver and her body thrown to the side of the road.  We subsequently have several murders running in the same vein inexplicably not linked with each other. The person who was the first on the scene of Eugenia's accident was also someone whose address was in Eugenia's purse. Was so much coincidence possible or is there some hidden hand in all this.

The other feature that was different is that the very professional Inspector Lynley jeopardises his honour and professional integrity in the face of a find in the murder investigation which is linked to someone known to him personally and he deliberately suppresses the information also involving his partner Havers in the subterfuge. Very unlike and different to the usual.

This book is slightly slower than her usual books and the book is huge at 800 pages, but it is nevertheless a page turner and you do want to know what is happening to the investigation. I also
liked the writing of a journal throughout the book and its throwback to incidents in the past.

A good read for mystery murder fans.
Posted by Mystica at 5:51 AM

800 pages seems a little excessive, especially for the mystery genre. I am glad you enjoyed it though

Wishing you a great reading week!