Give The Devil His Due by Sulari Gentill 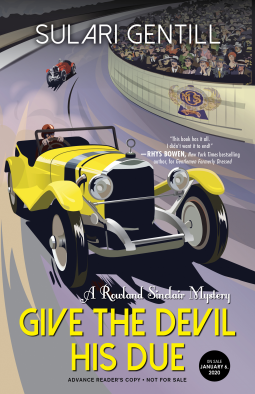 I love this author's style of writing and am very partial to a Sri Lankan origin author anyway!!!! So few of them around.


The story of Rowland Sinclair and his family - the closest we could get to aristocracy in Australia in itself is an unusual family and background. The understated riches, lifestyle and manner of Rowland is in itself admirable and a story on its own. Set him against a motley crowd of arty types like Edna who has acquired a reputation which is not fair, Communists and so called hangers on and then set an attempted murder/s in this background and you have a fascinating story.


Set on a race track with a killer reputation, we have people gunning for Rowland Sinclair. In the process others get killed which adds to the mystery. The 1930s political scene in Australia was complicated and amazing and to someone like me who did not have a clue as to what Australia was like then, the story was a revelation.


Sent to me by Netgalley for an unbiased review, courtesy of Poisoned Pen Press.
Posted by Mystica at 9:52 PM

Mystica, I have never read Sri Lankan or Sri Lankan-origin authors of crime or general fiction. Can you recommend any? Many thanks.

You have plenty of her books in this series to enjoy then.